Director Lulu Wang talks The Farewell, developing her personal story for the screen, working with Awkwafina, shooting in China

The Farewell is based on Lulu Wang’s own true story about her family conspiring to hide her grandmother’s terminal cancer diagnosis from her. Producer Alana Kode sat down with Wang at the Sundance Film Festival last year to talk about how she developed real events in her own life into a film, selecting her cinematographer, and how she cast Awkwafina in the lead role. Awkwafina recently won a Golden Globe for Best Actress for her role in The Farewell- the first Asian American to win in this category.

Paula Huidoboro first became drawn to telling a story with images as a young teen while taking photography classes at the local museum of modern art. One of her early learning experiences was as a camera intern for well-known cinematographer “Chivo” Emmanuel Lubezki. Paula was thrilled to work with actor/creator Bill Hader on finding the balance between violence and comedy on the HBO hitman/dark comedy “Barry.”

Walt Lloyd happened upon John Boorman’s crew shooting Deliverance in Georgia and decided he wanted a job in the movie business. His first big break was as a camera assistant on the 1983 film Never Cry Wolf, directed by Carroll Ballard. One of Walt’s earliest films as director of photography was on sex, lies and videotape for first-time feature filmmaker Steven Soderbergh. Host Ben Rock and Walt Lloyd also have a personal connection- Walt was the DP for Ben’s feature film, Alien Raiders.

Alik Sakharov, DP turned director, on Game of Thrones, House of Cards, The Sopranos, Ozark, and the director/DP relationship

Alik Sakharov shot many feature films and television series such as The Sopranos, Rome, and Game of Thrones before moving into the director’s chair. Alik feels cinematography, directing and writing must work together to create a story, and it’s difficult to separate one from the other. He is currently executive producer of the Netflix series The Witcher.

Phedon Papamichael and director James Mangold created an exciting, visceral experience of auto racing for Ford v. Ferrari, rather than the basic panning wide shots used in sports broadcasting or car commercials. Phedon had to shoot extremely close to the speeding cars in order to capture the effect of high velocity.

When setting out to make Joker, Lawrence Sher and director Todd Phillips decided to go for an intimate, 70’s style of movie that’s character-driven, rather than the large scale, elaborate looks typical of today’s comic book superhero/villain films. Joaquin Phoenix had some leeway to improvise and play with the character. Larry and Todd Phillips’ background of working with comedians on movies such as The Hangover made them feel comfortable with improvisation.

Rodrigo Prieto has shot many different movies with numerous looks and feelings. The Irishman is Rodrigo’s third collaboration with Martin Scorsese, who has always been a huge inspiration for him, and it was also an amazing experience working with such skilled actors on the film. 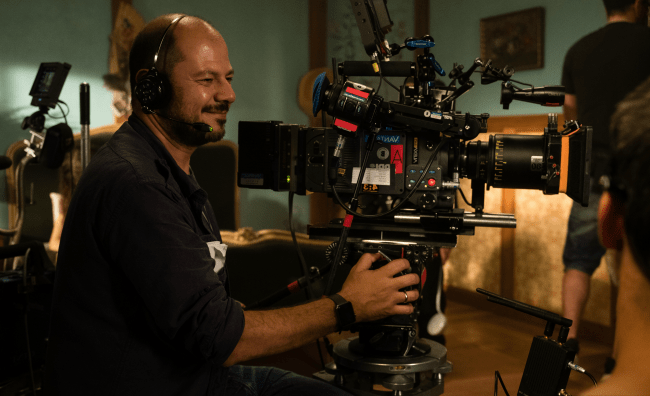 Cinematographer Mihai Mălaimare Jr. discusses his experience of shooting three films with Francis Ford Coppola and working with Paul Thomas Anderson on The Master. For his most recent film, Jojo Rabbit, Mehai and director Taika Waititi developed a very vibrant and colorful look for the film to emphasize Jojo’s fantasy world.

Mike Figgis, Oscar-nominated director of Leaving Las Vegas, Timecode, Internal Affairs, Somebody Up There Likes Me

Writer/Director/Composer/Photographer and experimental filmmaker Mike Figgis has never restricted his art to just one medium. In our interview, he discusses his love of filmmaking and his transition to digital after Leaving Las Vegas with the film Timecode.